Scotland beat Serbia on Thursday night to reach a major tournament for the first time since 1998. The result sparked huge celebrations in Scotland – here’s what it means to Tartan Army member and Sky Sports journalist Anthony Joseph.“In England football is big, in Scotland it’s massive”. The words of Darren Fletcher on Sky Sports earlier this season were backed up by the scenes of jubilation in Scotland and from Scots all around the world.- Advertisement – This was perhaps the best night of my life – and I was sitting in my flat in London watching the TV and drinking on my own. Scotland have qualified for a major tournament for the first time since 1998. The magnitude of this achievement, what it means to us and what it can do for the country cannot be underestimated.Ryan Christie’s raw emotion after the game during his post-match interview summed it all up. He epitomised how a whole country was feeling. I was crying on Thursday night – a lot. In a Teams Meeting on Friday morning, another Scottish colleague was struggling to hold back her tears when talking about the game. I’m even welling up writing this. This is a huge moment for us and for Scotland as a nation. 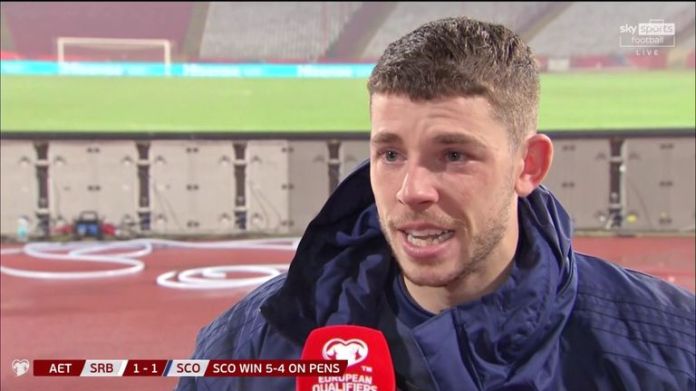 If not, we’ll still be doing our bit to show our support. The bunting will be out, flags will be draped over windows, pipers will be piping, kids – and adults – will be painting their faces blue and I’m sure Ted Christopher will continue hosting virtual gigs. There’ll be a Panini sticker book with Scotland players in it.There’ll be a real buzz about the place. There’ll be hope, there’ll be joy, there’ll be optimism and – who knows – it might just catch on. That kind of infectious feeling could change the mentality of the nation going forward.If it continues, kids growing up will be dreaming about playing for Scotland at a major tournament – and it will be a realistic aim. They will see their heroes playing on the biggest stage. These Scotland players will be genuine role models.And now we can maybe give them a better chance. The SFA will be getting around £10million just for competing – money which can go directly into youth development, facilities and coaching. For 22 years, we have missed out on this – 10 tournaments without this kind of money to develop our game in Scotland. Project Brave could become Project Success.We have a lot of catching up to do, but we can still rise and be that nation again, who were consistently at World Cups and European Championships.We’ve jumped over the biggest hurdle and the benefits of it could go beyond our imagination.For now, our focus is on next summer. Whatever will be, will be – we’re going to Wembley. 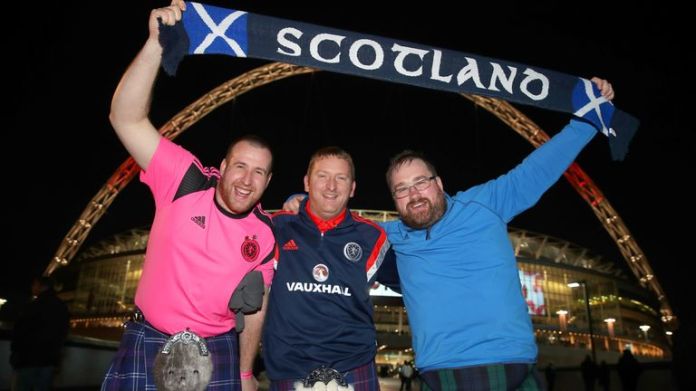 Image:Scotland fans have another Wembley date to look forward to I was incredibly nervous before the game – I had to go out and walk for two hours to burn off energy and kill the time.Then the game started and I was strangely calm. Scotland were playing well. One-nil up and it was going on two or three. I was becoming uncomfortable at how comfortable it was. “This isn’t the Scottish way?” I thought to myself. I was daring to dream.We were 30 seconds away from qualifying and then there was the inevitable sucker-punch – Serbia’s equaliser. I was flattened. I thought that was it – we’d go on to lose in extra-time or penalties. But we didn’t.Nothing is ever simple for Scotland. And it wasn’t last night, but it had a very different ending to the 22-year series we’ve been watching and it was an amazing feeling. – Advertisement – For too long we have seen glorious failures turned into inglorious failures. It was normal for Scotland to not be at a major tournament – each time we were looking at who England had in their group in search of a team to support.We’ve been the butt of all the jokes from our neighbours. England fans sing “Are you Scotland in disguise?” when they are beating a team easily. It’s been a tough ride.I was six years old when Scotland last played at a major tournament – World Cup 98 in France. I do remember it, but I didn’t experience it in the same way I can now. Ryan Christie was moved to tears after helping Scotland secure their place at Euro 2020 with a penalty shoot-out win against Serbia. Scotland can now look forward to Euro 2020 with the backing of a nation that has been allowed to dream again. A generation of younger fans, who’ve maybe felt disconnected from the national team in the past can look forward to seeing their own players on the big stage. I will be properly experiencing it for the first time.No one knows what kind of tournament it will be. Hopefully by June next year, fans will be allowed in stadiums. It would be just our luck to have qualified for a tournament that will be without fans – especially with two games at Hampden and a date with England at Wembley.Fingers crossed coronavirus will be under more control and we can party like it’s 1998.The Tartan Army will add value to Euro 2020 for sure – we are among the most loyal, friendly and jovial fans around. As we’ve been saying: “No Scotland, no party”. This time there will be Scotland – and there will be a party.I was gutted not to be in a kilt in Belgrade yesterday drinking with the Tartan Army. It felt weird not being there for the most important game in our recent history. But if it means we can invade Trafalgar Square before a clash with the Auld Enemy at Wembley, then it’ll be worth it. 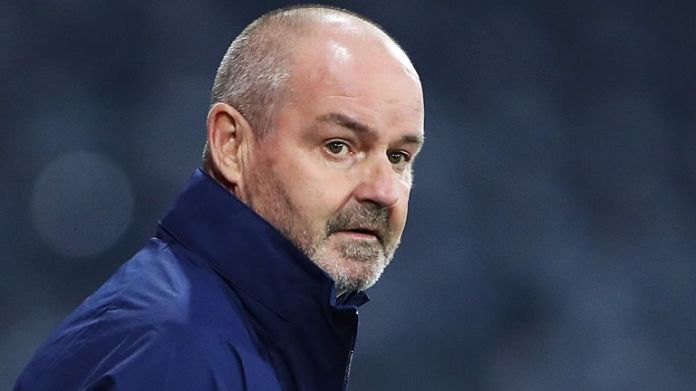 Image:Steve Clarke will be the first Scotland manager to lead his team at a major tournament since Craig Brown in 1998 – Advertisement – 1:42 I’ve been following Scotland around the world as a journalist and fully paid member of the Tartan Army, ever since – and we’ve never qualified, until now. A whole generation of Scots have never seen the men’s football team at a World Cup or Euros.Qualifying draws were made and each time I’d think “this is our campaign”. Each time seeing a new slogan – “Nothing Matters More” became “This Time” – and still nothing happened. I was going on trips with the Portlethen Tartan Army and the game would be the worst part of it. I stood on the terraces at San Marino last year, after a 3-0 loss to Kazakhstan a few days before, watching Scotland struggle to break down a team of part-timers, hoping for the game to end and to put me out of my misery.Don’t get me wrong, there have been highs. But for every 1-0 win over the Netherlands and Griffiths free-kick against England, there’s been a 6-0 drubbing in Amsterdam and a Harry Kane equaliser. The pain was normal. The lows were normal. It was very much part of being Scottish. And a generation of Scots have been brought up like this. It’s shaped the mentality of the country – we are generally pessimistic. I would say to people: “We always find a new way of going out”. It was the hope that killed us, so we stopped daring to dream.But on Thursday night, Steve Clarke’s side changed everything. 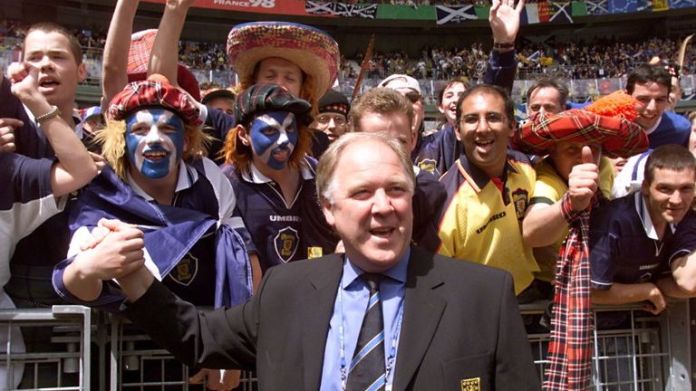 Image:Scotland fans haven’t been to a major tournament since Craig Brown led the team to the France 98 World Cup 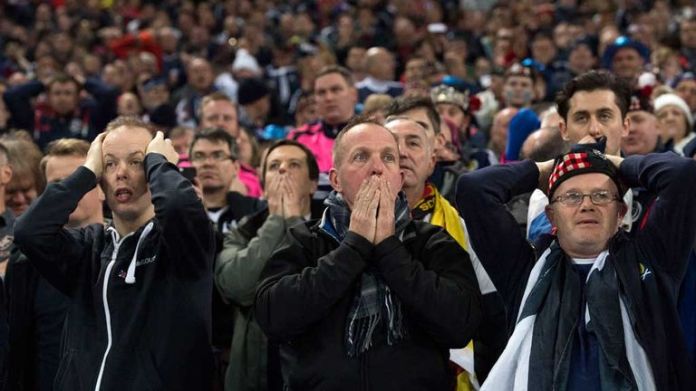 Image:This scene has become the norm for Scotland fans over the last two decades – Advertisement –